Less than two months into the Great Hall 1000 year Thang Long – Hanoi … Electronic clock countdown at the top of Dinh Tien Hoang Street . Now the clock on the Post Office roof side of Bo Ho is still hard to count the time for the capital city. Over thirty years ago, on a clock that idea anniversary of Thang Long thousand years old is still far too many people. 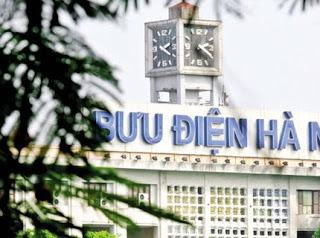 Ringtone first heard 12 am 02 Sep 1978, Gold star legal exposure bright pink… tone of the song ” Praise ofPresident Ho Chi Minh” soon become an indispensable voice in key found on the people living around Hoan Kiem lake. Now the city to grow, easy to see now everywhere, and people with clock bell from time to time. But those who stick with Hanoi still can not unconsciously looked up at the clock on the roof pillars Post Office building when passing through Bo Ho.

Try sitting in front of the entrance houses a post office. 11 hours 45 minutes, drinking cups of tea awaited to hear the bell. 11 hours 59 minutes, the familiar bell do not see where. older woman do not understand why old woman sell tea cups in three-step staircase daily to the post office said: “Two year do still ringing again.” But Ms Yen – staff offices Hanoi Telecom 1 swear that people in the agency who is most clearly hear the bell: If the bell hit slower clock hours for a little sister is impatient to question the power immediately. The sound of clock hum in the hall, resound through the door slot each room … Where to go to Hanoi but did not look at clock, despite uncertain times, they still amiss nothing.

The room that controlled large clock on the roof turned out quite simply, out of the way in the post office building. In less than 20m2, the most superficial things is the control panel clock. If the Post Office on the roof of the building has four clock faces, then in the control room had nearly a dozen different clock faces. People in the clock (now the Power of Hanoi Telephone Company 1), which reduced the number of troops over time, so only two people, is hard to climb the roof of the building Post Office visitation three times a day, as well as summer-winter, cold and hot.

Clock Tower on a sunny mild, windy outside overlooking the green Hoan Kiem lake, which closed within six surface trap, standing for a while was wet sweating. The hot day in Hanoi on 40 degrees, then the tower is indeed a “steam room” as he jokingly calls. Beneath the other way, is so noisy, but on this, distant 10 meters, a bee was enough ear ringing. So know the noise has a strong line sweep away the holy sound of the time … 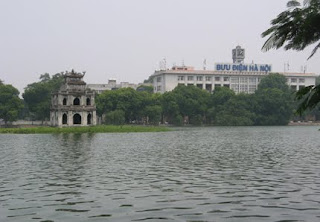 Ms Le Thi Yen – the first acquisition, care and operation of a system is more when she is asleep, she thought as still hear every 30 seconds of clock time mother. The only sounds familiar to you in the night duty in the control room. “Back then all the six drivers who are women. All broken, damaged or old we are tinkering repair. By foot diameter clock face both parents in the control room also find my own material, grinding and renewal … “.

Mr Van Kieu Van, one of the generation who replaced MsYen, more than 10 years of direct operations, said: “There are times when suddenly lose power or some day sprint as in flower festival then we just have to adjust the clock. ” Problems with newly loaded battery, clock run fast with joyful atmosphere to celebrate 1000 anniversary of Thang Long is going on underneath make ms Van and his group run hurry on 7 floor repairs. Fortunately, the dark, digital lights are off all, this is certainly not the flower festival takes place with the fastest speed seen in history: an hours equivalent six-hour normal… by him not in the family’s Eve, but on duty at the post office to make direct Ringer’s Eve, as well as mistakes to avoid it.

If one day we replace this clock with a modern digital watch? He told that only wanted to repair, renovate the controls so that the modern, more secure. But the magnificent picture, the familiar clock face with four needles squares, bold, he would never want to change. And although modern ahead, people may not be on duty, he can not respond even to think of machines, he will remember much because it is the his job !

The music was slow clock, I’ve heard is through …the first a documentary disc of Ms Yen. When alive, her husband is often open for her children see, like a pride of the family. An Mr Van, remember the his children show their friends are a father working day in the Ha Noi clock, he smile …

The system Hanoi Post clock with 250 is attached small clock, now only clock on the roof of post office operations.