Before becoming a noisy streets, bustling that Hanoi capital is a big village. Everyone knows is very characteristic of the village corner. Sometimes, we again found the corner like a small village and Tam Thuong lane like this an alley. 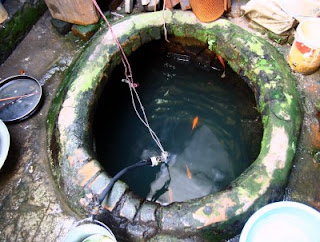 Old Tam Thuong belong Yen Thai village, Tong Thuan My, old Tho Xuong district. According to the Hanoi street dictionary “Around the Nguyen dynasty known as Tram Thuong, this place has built a grain warehouse provisional tax paid by the people before moving into the main repository, called a Tam Thuong repository should then change to the Tam Thuong lane” Later, mix with the pressing of social life, many lane has become more crowded than the city and Tam Thuong lane keeping for themselves the old definition. There, one can see the familiar images such as banian tree, water wells, yard of communal house – symbol a traditional village in Vietnam.

In the past, Che Lan Vien poets have written about Tam Thuong lane that:

Lane is cut off that but heart is far away

Love a life that is not temporary loving (Tam Thuong) …”

So, while all the city s are mix with modernization, the streets becoming crowded, the Tam Thuong Lane remained nostalgic for their significant features. Rhythm in the alley was different outside, the lane is still attract,zigzag path, only enough for two people spleen together, as the wells with many people waiting to get. The space of a village is suddenly reappear very lively and full in the town .

The ancient wells located in the blind alley with the marks of time. There were few smiling faces suddenly peaceful encounter each other in a small alley. Seems like a friendly cultural communication characteristics of the Vietnamese still be kept fully in place, different rush pace of life that faces have just nodding head outside the street

Rhythm is noisy glance a small alley now appears in a few more kiosks on the sunset serve people. Small lane, to reach the afternoon became narrower. Everyone is pulling together to enjoy fried fermented pork rolls, chat. You can see in this place a lot of artists. They come here every day and leave the stories, joys, sorrows, and never did understand himself, which became part of the Tam Thuong lane that we did not know.

An early April visit Yen Thai communal house in the village (This place started from 1063 up to commemorate the merits of the Queen Mother Y Lan, who was Dai Viet people at that time was “Mau Nghi Thien Ha.) light incense and while waiting incense to slip across the space, where it is known gold strike anyone open gateway, a man stepped out of exercise morning, few people early market. The first sunbeam light up, it is a new day begins in the Tam Thuong alley …