Concentration of ancient works and high density, Thuy Khue street brings a unique beauty that no other streets in Hanoi have been.

Thuy Khue is a long street running parallel to the southern shore of West Lake, belong the territory Tay Ho district – Hanoi. West side of Thuy Khue street, adjacent to the road where the Buoi street, the focus of high density bring works of ancient appearance.

It was about a dozen village gate bearing marks time with Han scripts parallel sentences on the sides to welcome guests. It is the communal house roofing, old moss temple roof…

These buildings are the legacy of the village has existed for centuries on the southern bank of West Lake which is known collectively Ke Buoi. Adjacent to each other along the axis Thuy Khue street today, in order that the village of Yen Thai, An Tho, Dong Xa, Ho Khau and Thuy Khe.

This gives the Thuy Khue street a cozy space village , a unique beauty that no other streets in Hanoi have been. It can be said the soul of Thuy Khue street is the breath of the traditional village in the heart people in the modern capital is changing every day

Here are some pictures of rare and exotic streets in the heart of Hanoi: 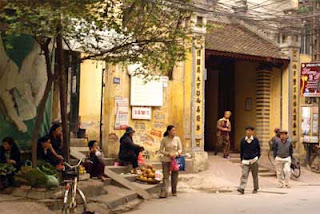 Yen Thai village entrance, No. 562 Thuy Khue. This is where the King Tu Duc, set four letters of gold “My Tuc Kha Phong” (Fine Custom) in 1867. Yen Thai village famous for serving as Do paper 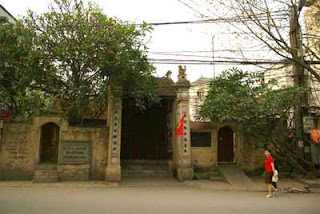 Thuy Khue street have temple to worship Ve Quoc Dai Vuong in Ly dynasty, was set up in 1128. Temple ceremony and the two brothers Cong Le and Ca Le, these two legendary of the Ly dynasty have service squash the rebellion 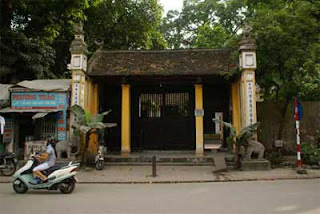 Voi Phuc temple belong old Thuy Khue village where worship Uy Linh Lang Dai Vuong, a royal prince of Ly dynasty had great success in the fight against the invading of Tong(China) in 1077.