Hanoi is now not only the pride of Ke Cho particular and Vietnam in general, but also a passion and interest in exploring deep in the heart of the alien “accidentally” love the land thousand year old. 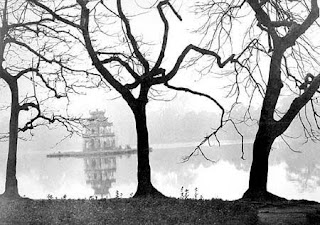 They are to Hanoi in many different situations, different times, different positions, but all have one thing in common: The land area flexible, human exhaustion, a convergence of thousands of lives were quintessential progeny attractive not only by their external beauty, but also by the compelling spirit hidden inside.

Life in Hanoi has given them a new experience, making them feel their soul richer. As an individual, they were rewarded again, contributing more beautiful land of dragons flying.

The woman of heritage 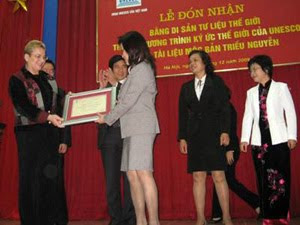 To work in Vietnam less than a year, Catherine Martin Muller, UNESCO Representative Office in Hanoi Hanoi was widely known as a “The woman of heritage” – and consultants who have contributed to the Hanoi as well as the preservation of promoting the cultural heritage objects and intangible capital’s typical.

In Hanoi for a short time that her life has changed a lot. The first is the preference of dress. In her wardrobe, western clothes make room for the traditional soft orient robe, yet luxurious, made from material of Ha Dong silk.

Ms Catherine would not have expected that tenure will be a vibrant in Hanoi. Less than half a year, Catherine was given on behalf of UNESCO offer Hanoi in particular and Vietnam in general 3 In recognition of Heritage. It was World Heritage: Documentation wood block of Nguyen dynasty, testimonial enrolling in Quan Ho Bac Ninh fork song and Ca Tru singing is cultural heritage intangible and Thang Long Royal Citadel is World Heritage.

In a talking, Catherine had said she was particularly impressed by the Ha Noi enjoy, create music, poetry and other forms of cultural art. She also expressed admiration before the dynamics of Hanoi in the introduction to the world and share cultural characteristics typical. Not only are consultants effectively for Hanoi in the promotion of heritage values, Catherine also with Hanoi people involved in preserving the environment.

“I think Hanoi in the right direction, a positive finding and sending the dossier to UNESCO. The nomination will help the community is aware of keeping heritage by preserving this legacy environment to exist is also important. I also want to call all of the people holding hands with Hanoi Hanoi to make the cleanest city in Asia – Pacific. In that environment, heritage will be protected better. This is a great contribution to the Great Hall of 1000 year Thang Long – Hanoi, “said Catherine.

Hanoi is an endless source of my inspiration 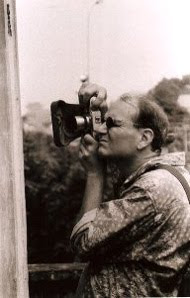 Love the bridge, Mr. Jardine has his wedding to a Vietnamese girl on the bridge in the Long Bien bridge Festival was first held on April 10/2009. One of the things that he seems fascinated at every moment the history of Vietnam, Hanoi’s bridges are named: “Each period, the bridge has a different meaning. First, it’s like a civilized French in Indochina. Then, when the war against France took place, it carries a different meaning. After the historic victory of Dien Bien Phu in 1954, Vietnamese Minh returned to Hanoi via the bridge to take over the capital. The bridge became a symbol of victory when French forced to leave Hanoi was through the bridge forever. During the American War, American bombs have destroyed many bridges to cut off aid to Hanoi, but every once bombed out bridges, immediately after, the people of Vietnam immediately resumed again “. 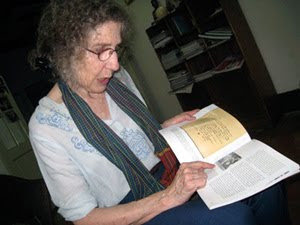 Long Bien bridge in the pen of female American writer Lady Borton appears curved like the soft lace border across the Red River. Under the current bridge is the Red River Alluvial red scroll, bend to finds its way into the sea. Two side of the river under the Long Bien bridge as green as grass cabbage and green vegetables, the women back on the river engross picked vegetables, ground load, distance is undergoing green rice paddies to the horizon…

In the famous book “Followed the sadness” of her, who are considered “the only American woman to understand Vietnam as thoroughly” set III was devoted to writing about Hanoi late 80s, early in 1990 with the title “Ha Noi, Vietnam’s biggest village.”

To write this book, Lady Borton heard the sound of the weekdays.The sound wheel of woman sell Phorattled on the road when Hanoi misty or shimmer dark of night; the sound of shuttlecock of the old man and old woman hit in the Thong Nhat park each morning, the sound jumping rope of children out street, train whistle ” wailing, deep bass ” is pulled laboriously trains up the slope; the sound of several bicycle at dusk on Long Bien bridge; The voice of farmer he called buffalo under the bank of bridge and the whispering narrator family traumatic war with share voice and softly goodbye greetings as leaves fall in the autumn …

Presence in Hanoi early in 1975, witnessed the rapid change in the city, maybe so, Lady Borton is a separate probably love the noisy, crowded and noisy traffic of Ha to Noi in early development. “In the morning traffic to work, bike faster cars, faster than taxis, fast motorbike. At any blockages so they can bike to the sidewalk – which motorcycles and small cars do. Take what is by bicycle, just healthy without exercise. When cycling I can connive just find yourself thinking at that very happy. Hanoi progress will go back by bike, “Lady Borton share. 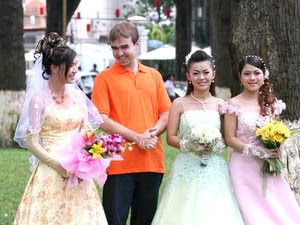 First came to Hanoi in 2002, Joe’s plan is to stay in Vietnam a month and use English. But really strange, almost eight years had passed, he still could not leave this country and his Vietnamese vocabulary that people are addicted noodle with soya curd and shrimp sauce sidewalk when he heard also startled admiration.

Joe said: “I was of Vietnamize”. Last name of Joe is Ruelle – that is, small town. Words to a song about Hanoi “Small Alley, a small town / My house there,” Joe “in love” by Hanoi since the first time that any such return home. Joe “feel” as if Hanoi boys and girls love that.

In his blog, Joe has given Vietnamese people a chance to see their country through the prism of an alien in the mother tongue. If the blog, Joe expressing love Hanoi through words, then in real life, Joe join very much involved in social activities practically as many years as a Goodwill Ambassador for the humanitarian program for fundraising walk pediatric cancer patients in Hanoi. Not only calls for Vietnam to participate, Joe even called friends abroad, the international community together with their hands because the fate of little unlucky.

It was found that, love Hanoi helped our friends in many ways successful. If Catherine Martin Muller successful in helping Hanoi people appreciate the heritage of ancestor that photographer – Douglas Jardine found inspiration not only writing but also to find personal happiness when become a son in law. of Hanoi.

If Lady Borton had poured out by “sorrow of war” to be inspired with a modern Hanoi that Joe Ruelle students became public adored in Vietnam. Feelings (say no more than words) is love Hanoi, what they have been increasingly devoted to Hanoi confirmed a characteristic of cultures of Thang Long-Hanoi is the convergent and shine, a friendly destinations, peace with your friends over the world.