Van Mieu – Quoc Tu Giam is located in the south of Thang Long-time home Ly. Before the contents of the stone stele named with the names of those successful at the imperial exams. This is the place to the domestic and the praise and gifts for students to exchange points test and study well and is excellent where the doctor from now on to “frown” before each exam. 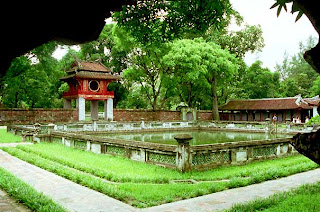 Van Mieu was built in 8 years Canh Tuat (1070) New Spirit in the second Vu Ly Tong, making statue Chu Cong, Khong Tu and painting of the cross That delicate gentle four seasons sacrifice. Prince to teaching. May 1076, Ly Nhan Tong set up the Quoc Tu Giam, may be considered here is the first university in Vietnam. Initially, the school just for the king and the right to mistreat you (the name is Quoc Tu). In 1253, King Tran Thai Tong to expand the National Electronic and collected all the children of people can be excellent learning.

To the Hau Le, Nho giao very prevalent. In 1484, Le Thanh Tong build stele with the names of those successful at the imperial exams 1442 onwards.

May 1762, Le Hien Tong for editing is Quoc Tu Giam – the training institutions and higher education levels of court. May 1785 moved to the Thai Hoc.

Life of king Nguyen , Quoc Tu Giam set up at Hue. Year 1802, king Gia Long is determined Van Mieu – Hanoi and construction for The Van Khue Cac. Old School Director at the Temple after the Khai Thanh taken as the holy church to parents Khong Tu. Early 1947, France army as a cannon ball make the house collapsed, only the base with two stone columns and 4 crunch. Today, the house was to build the architecture with the same time all the rest.

Khue Van in the Van Mieu, looking from outside the Thai students in the Ly – Tran scale of what is currently not in, because the historical material has been burned or Minh troops take on the Yen Kinh, Beijing on present. However, the Thai Hoc at home was Le Le Quy Don described in “The cultural sub-index” is: “The Thai study, three times, with horizontal walls, classes in tile contract. The teaching in the east and west are two rows 14 times. Classrooms students are further three rows, each row 25 space, each space have 2 people. The whole architecture Van Mieu current architecture is the first time Nguyen. Campus is surrounded by four walls built with Bat Trang bricks. Architectural Van Mieu – Quoc Tu Giam layout is posted on each district, each of the North-South axis, simulating the overall planning area Van Tu Khong temple worship in his hometown in Khuc Phu, Son Dong, China . However, the scale here than simple, architectural simplicity and the traditional methods of ethnic art.

In temples divided into 5 areas clearly, each area has a short wall and gate travel contact with each other: 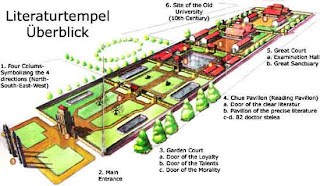 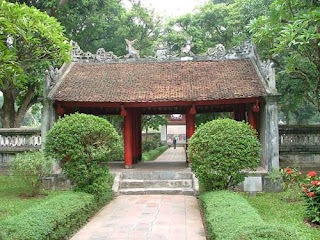 Second zone: from Dai Trung Mon to Khue Van to the (by North Military General Nguyen Van Thanh Thanh for construction in 1805). Khue Van is the architecture is not due but the rate of harmonious and beautiful. Architecture with 4 pillars square (85 cm x 85 cm) below the weeds attic above, the structure is beautiful wood. Floors are 4 of the circle, a handrail and the media painted wooden roofs with simple, rustic. Roof tile husband two classes make up the 8 roofs, wood roofs and flat roof surface. Attic is an eight square floor roof, the four walls is window circle the sun’s rays cast the light. Image Khue Van Cac all from the sky down to earth cast earth which are the symbol of square wells Thien Quang. Works bring beauty Khue stars, bright stars symbolize the literature. This is often used as places to enjoy the Creation of poetry from ancient to present. Two right-left is Van Khue Cac are Bi Van Mon and Suc Van Mon neighborhood stele named with the names of those successful at the imperial exams.

Major third: including lake Thien Quang Tinh ( wells flash sunlight), with a square. They are two sides of stelenamed with the names of those successful at the imperial exams . Each plate is made of beer stone carving contest to name of the first doctoral candidate, first rank doctorate second laureate, third highest acedamic, second rank doctor, PHD. Fabricated on a turtle back. There are 82 stele on scientific examination from 1442 to May 1779.

Fourth area is a center and the architecture of Main Temple, the two large layout in parallel and connected to each other. Outside the court is the way in court is also Thuong palace.

In Van Mieu has Khong Tu statue and Tu Phoi (Nhan Tu,Tang Tu, Tu Tu, Manh Tu). In power worship Khong Tu has two pairs crane ride on turtles. This image is very specific in temples, pagodas, mausoleum, temple look at Vietnam. Photo crane ride on turtles in the back in many temple, temple …, crane turtles standing on the back of the harmony between heaven and earth, between two extreme negative – positive. Crane is the emblem of the essence and higher. According to legend turtles crane and sometimes you are very friendly together. Turtles symbolize the animals live under water, can creep. Crane is symbol for animals living in shallow, can fly. Atmosphere as rain floods, flood of a large area, crane can not live water, turtles should help overcome areas to flood the place dry. Conversely, when sky drought, turtles have been taken crane to help areas of the country. This says to the general aquatic support and help each other during difficulties, the problem between the good friends. 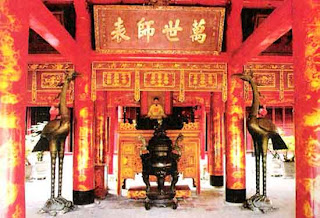 Today, Khue Van Cac in Van Mieu-Quoc Tu Giam was recognized as the symbol of Hanoi.

PS: On March 9, 2010, in Macao, The memory World Committee in Asia-Pacific of UNESCO has approved and recognized doctor stone stele of Van Mieu-Quoc Tu Giam is a world heritage documentation